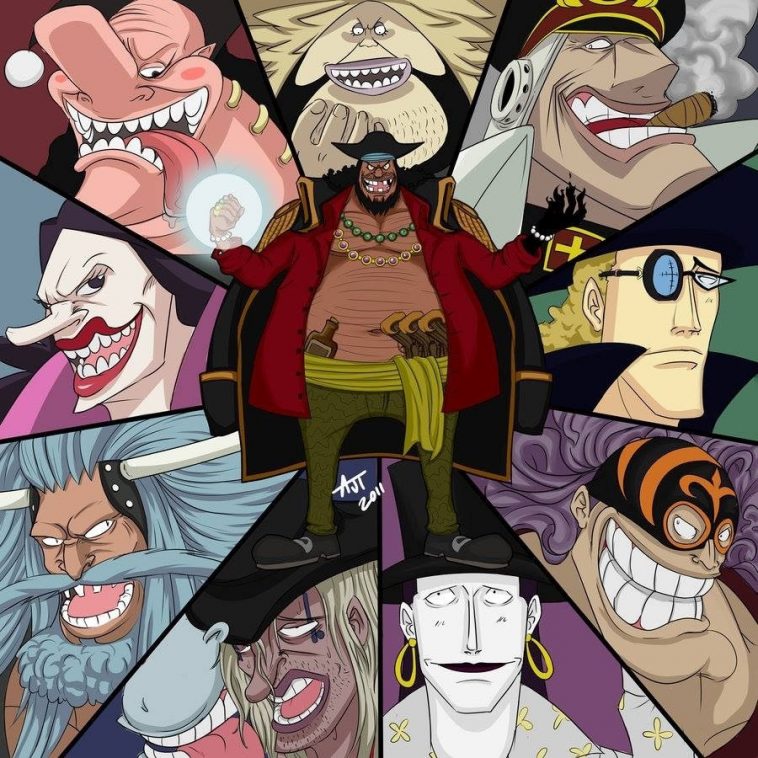 Blackbeard Pirates are taking the stage right now in One Piece and this is a list of the Strongest Pirates from Blackbeard Pirates. This list is from the weakest to the strongest in my opinion with what I’ve seen from the Anime and manga.

10. Vasco Shot
His abilities are still to be shown, he was jailed in the level 6 of Impel Down but survived the fight to make the cut in joining the Blackbeard crew. Very little is known about Vasco, he is always seen drunk and wanting to drink more. On one occasion, he told Blackbeard that they should invade an island just for the booze. He endured the same hit from Whitebeard as the others with the Gura Gura no Mi fruit shockwave and another shockwave from Sengoku Buddha form too. 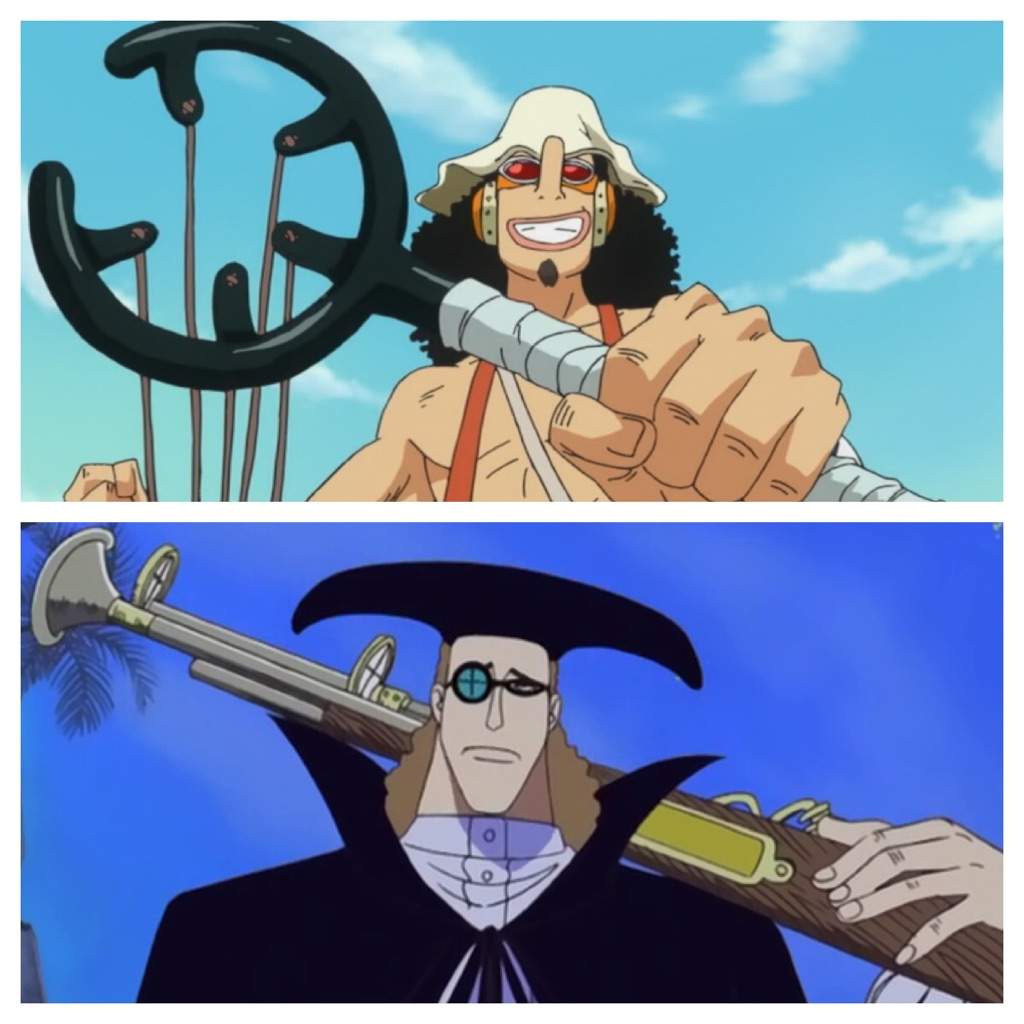 9. Van Augur
The Usopp of the Blackbeard Pirates. He is much more skilled than Usopp. With the rifle Senriku by his side, he might be the strongest sniper in the series. One episode showing his ability is when the Straw Hats had witnessed seagulls flying around the ship and Chopper suggested Usopp that they have been shot down. With no island in the vicinity Nami dismissed it as it was impossible. Van Augur or Supersonic as some call him, could tell that one of the seagulls didn’t die immediately. He is also known for his speed in running and shooting in the fight against Ace. 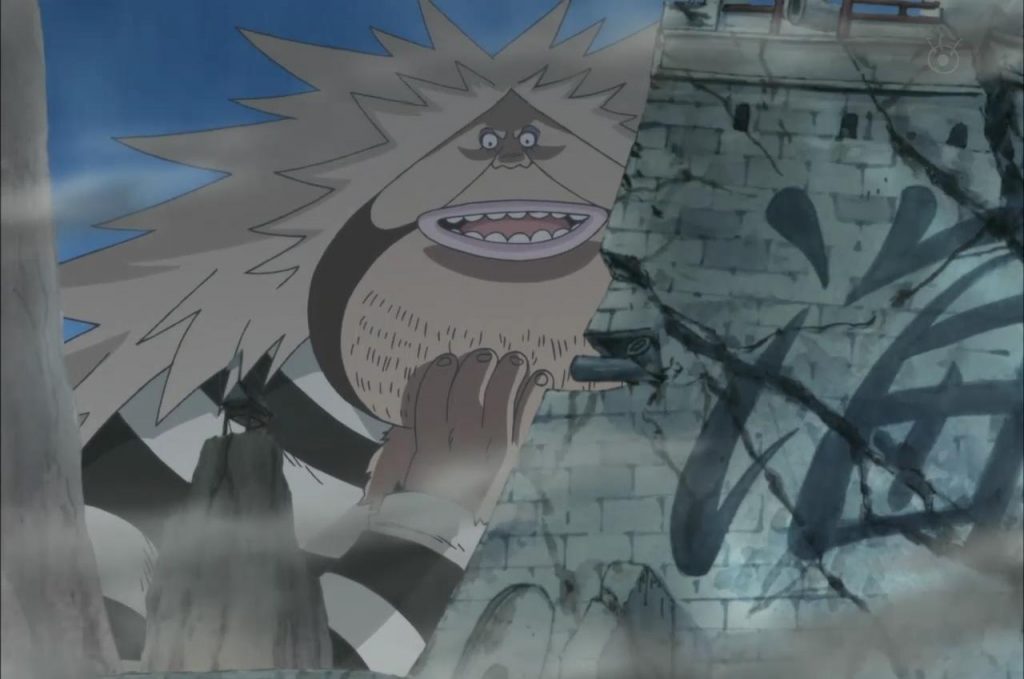 8. San Juan Wolf
I given him this position as he did not participate in the Marineford but we haven’t seen Sanjuan Wolf in action and his past is erased from history. He is also known as Colossal Battleship due to his size. He has been imprisoned in level 6 of Impel down. He was one of the survivors when Blackbeard told level 6 prisoners to fight to the death and the ones survive will be part of his crew. Even though he was the only person who did not fight in the Marineford battle and his full body never revealed yet, due to his past crimes the marines erased his existence from history. This could only mean he is one mean badass. 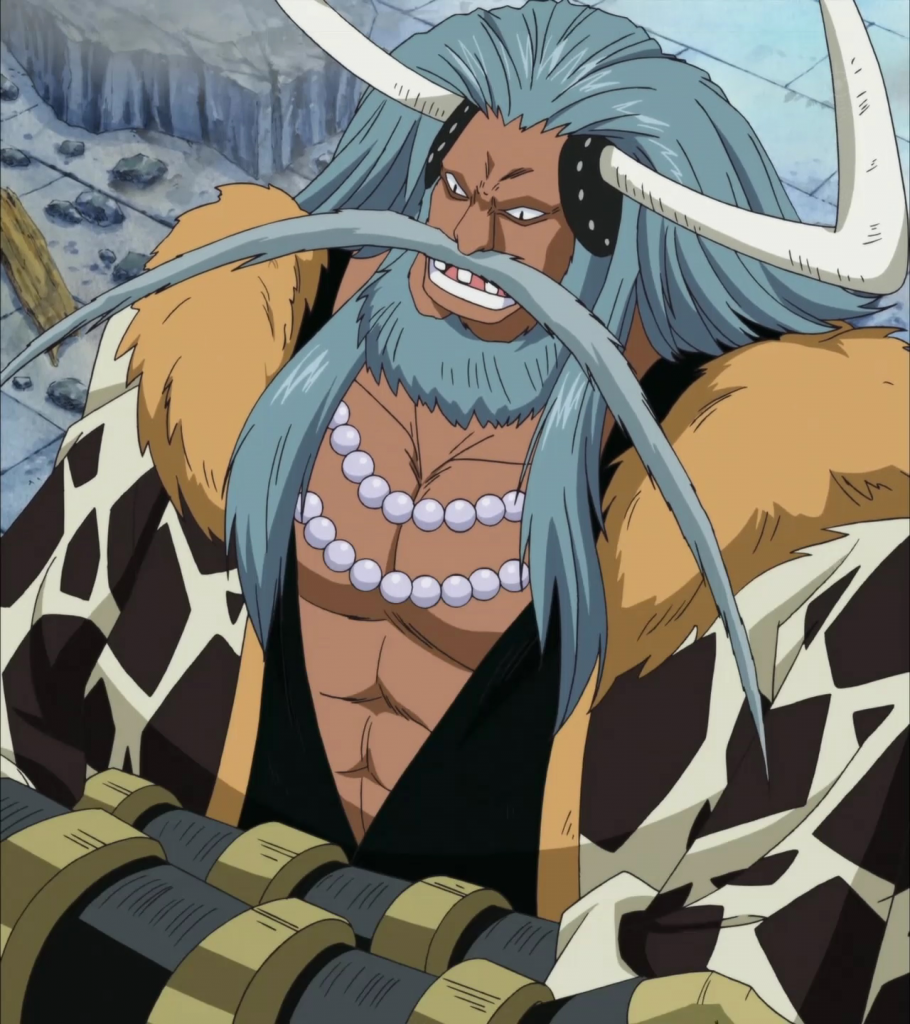 7. Avalo Pizarro
Avalo Pizarro is also known as the Corrupt King. He has cat-like characteristics like has vertical pupils like a cat, his blue hair resembles a lion hair and his moustache is quite long like a cat’s moustache. He also got horns attached to his head. If you are wondering is that all? Well he’s got black and dark bronze metallic gloves. He is one to look out for as he has still to show us what he is capable of. 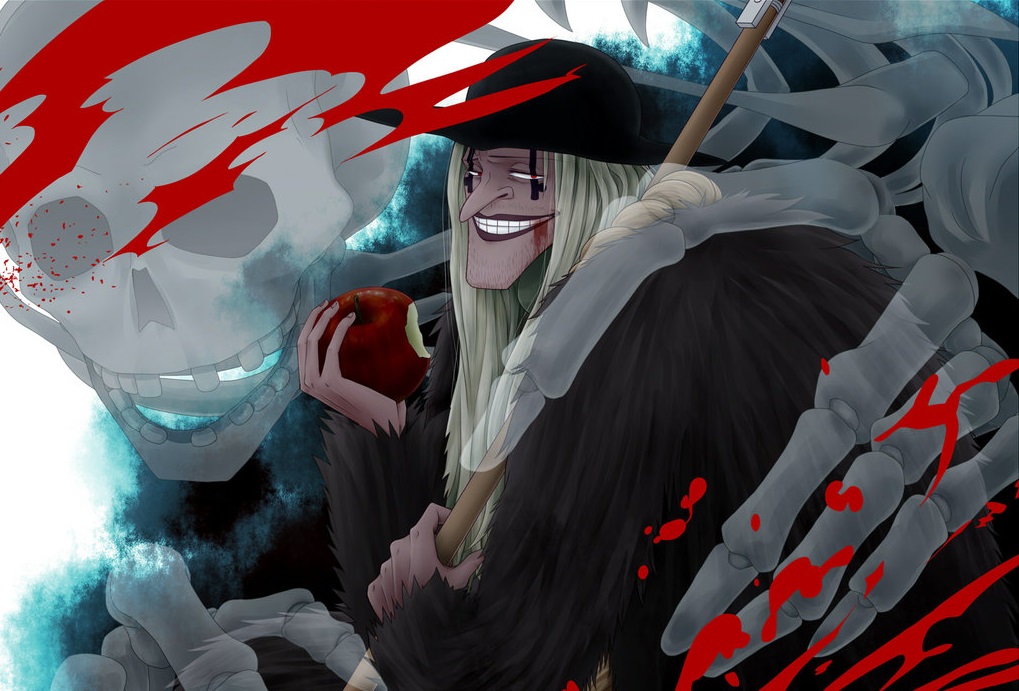 6. Doc Q
Doc Q is the doctor of the Blackbeard Pirates. He was born with a chronic illness that makes him need Stronger (his horse) to move around. While having a sick body, Blackbeard still wanted him in his crew and he takes no weaklings with him. He rejected Jewelry Bonney with a bounty of 140 million so Doc Q must be very tough. He endured a direct shockwave hit from Sengoku in his Buddha form and stood up with almost no damage at all. He also have survived after being exposed to Magellan’s venom. In the Marineford battle he heavily injured Whitebeard with his scythe. His sickened body shouldn’t be able to handle a scythe that big let along injuring Whitebeard. Doc Q has superhuman strength too as he could be seen paddling their raft and keeping up with Jesus Burgess, the man with titanic strength. 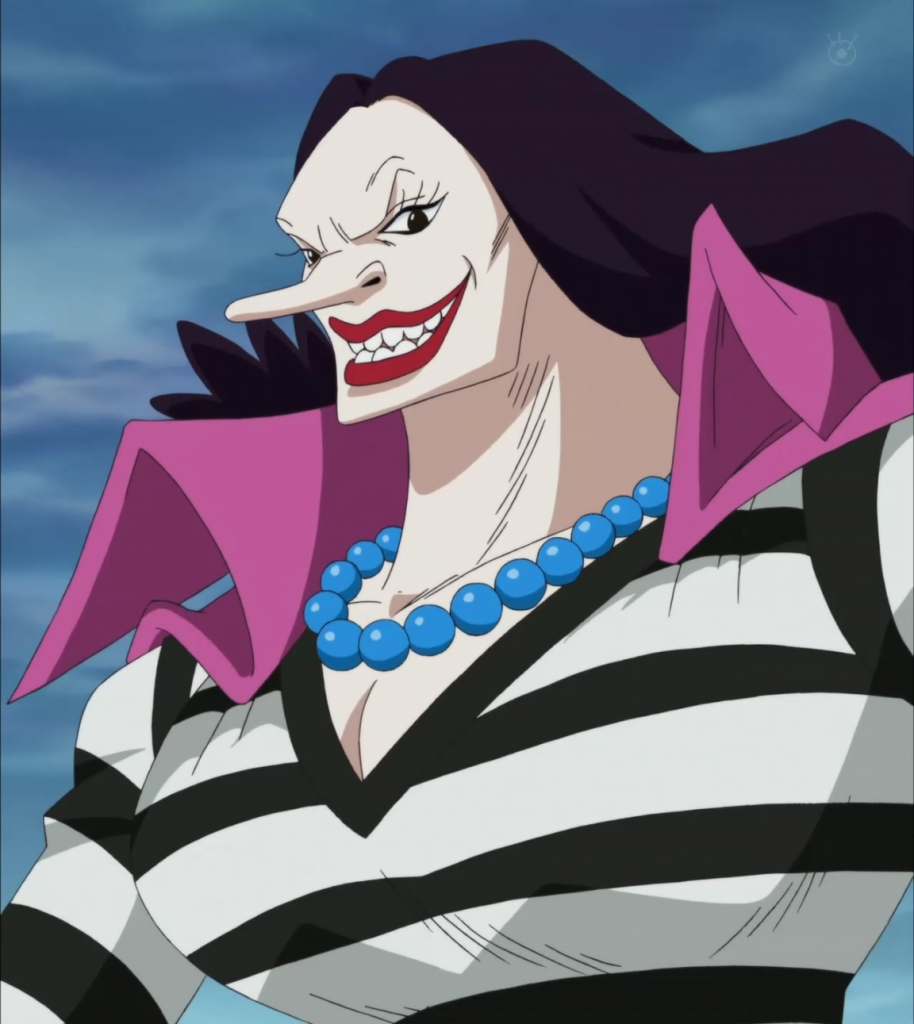 5. Catarina Devon
Also known as Crescent Moon Hunter. She is one of the most dangerous women in the series so far. She was in level 6 too. She is seen around wielding a spear or a staff whilst attacking Whitebeard. Without saying any spoilers, you should keep an eye on Catarina and we should soon see why she is called Crescent Moon Hunter.

4. Laffitte
His epithet is “Demon Sheriff”, he was once a policeman, now with the Blackbeard pirates. His powers still unknown but what we know so far is that he can obtain wings possibly from a devil fruit. He is seen around with tap dancing shoes and a cane. He is also the navigator of the crew and the captain of the 5th fleet. 2 things that makes him dangerous is his infiltration skills, he infiltrated Mariejois and nominated Blackbeard as Shichibukai. Mariejois is the sacred land of World Government and he managed to infiltrate and joined the meeting also he hypnotized the gatekeepers of Marineford to open the gates of justice to anyone passing through. 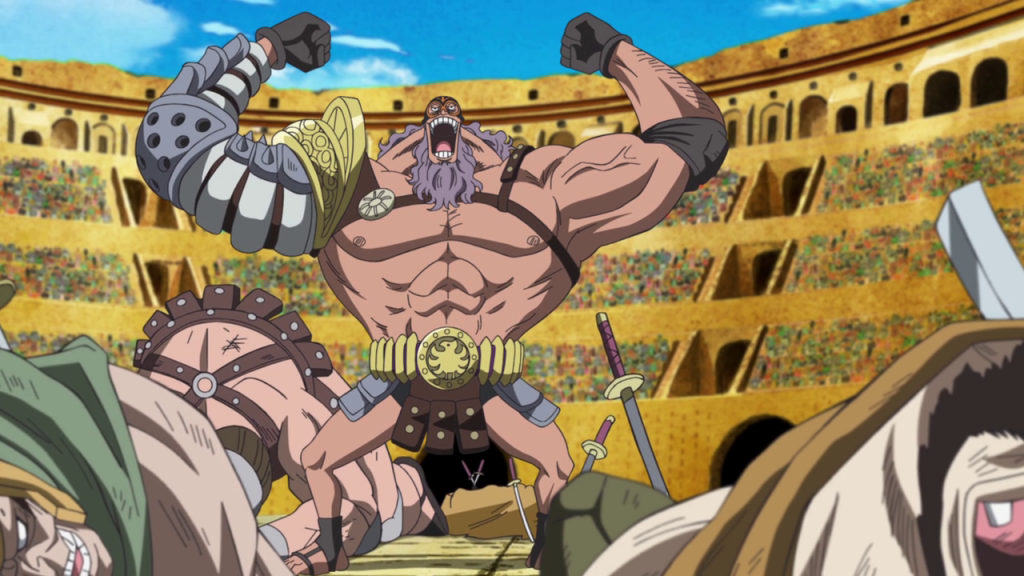 3. Jesus Burgess
Is the Captain of the first ship of Blackbeard’s crew. He is mostly known for his brute force and never give up as he doesn’t know when to accept defeat even when badly injured by Sabo and having a bone sticking out of his legs. He also won the Block A in Corrida Colosseum in mere seconds. He can easily rip apart an entire building and grabbing it from the foundation and throw it a long distance like he did to Ace. Even though his legs are insignificant compared to his upper body he has great strength in them as he leaped of the Dressrosa Palace and got to the second level in a brief time to get to luffy’s position. Apart from carrying an enormous physical strength he also possesses Busoshoku Haki and to top it all off he is after a Devil Fruit which probably he will get soon. 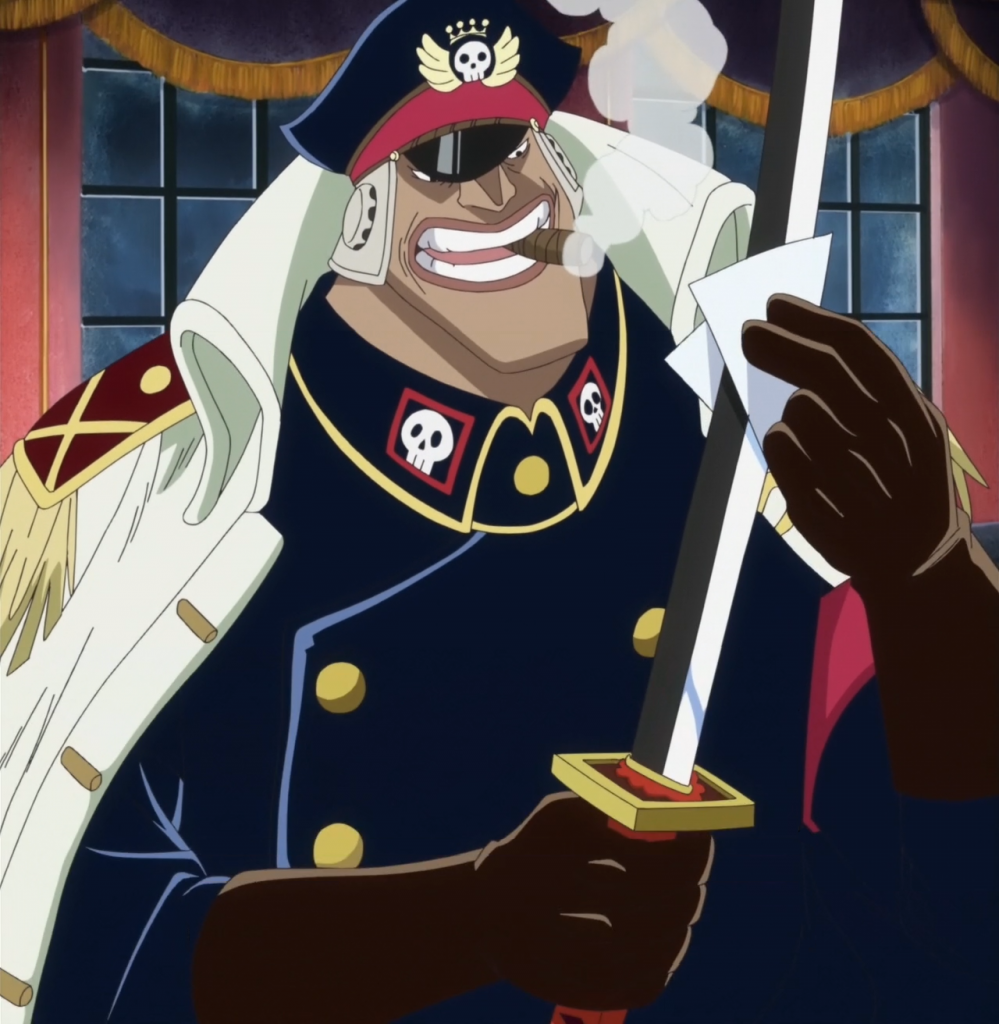 2. Shiliew
Shiliew is also known as Shiryū. He was the former Head Jailer under Magellan. He was stripped of his duty and jailed for not showing mercy on prisoners and brutally kills anyone he targets. Shiryū is a deceitful, bloodthirsty, calm and cool headed. He got angry on how badly the Blackbeard pirates prepared themselves for the New World. Shiliew owns a nodachi, which is a sword with the cutting abilities and range far better than a katana. He killed many people inside Impel Down once they gave him back his sword in under a second. 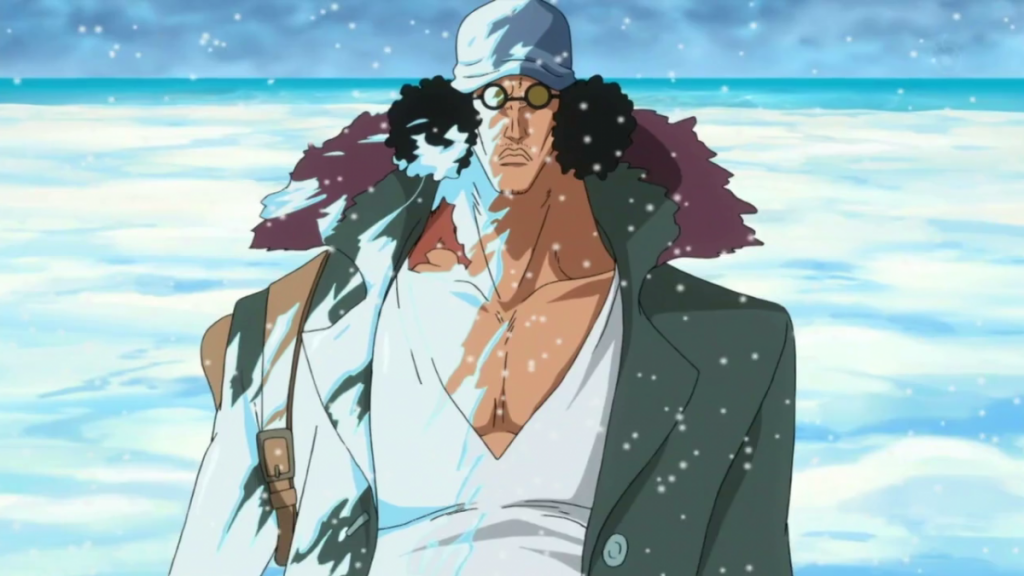 1. Kuzan
Even though Kuzan is not part of the Blackbeard pirates and just an ally as BB pirates do not trust him as he was a former Marine, I must put him in this list. He was one of the marine Admirals and he is one of the strongest around too. He might also beat Blackbeard at this stage one-on-one, but Blackbeard is a good strategist and showed it from the beginning. Kuzan was nominated for the position of fleet admiral by Sengoku. With his Hie Hie no Mi fruit and his abnormal overall strength he is one of the most dangerous around. 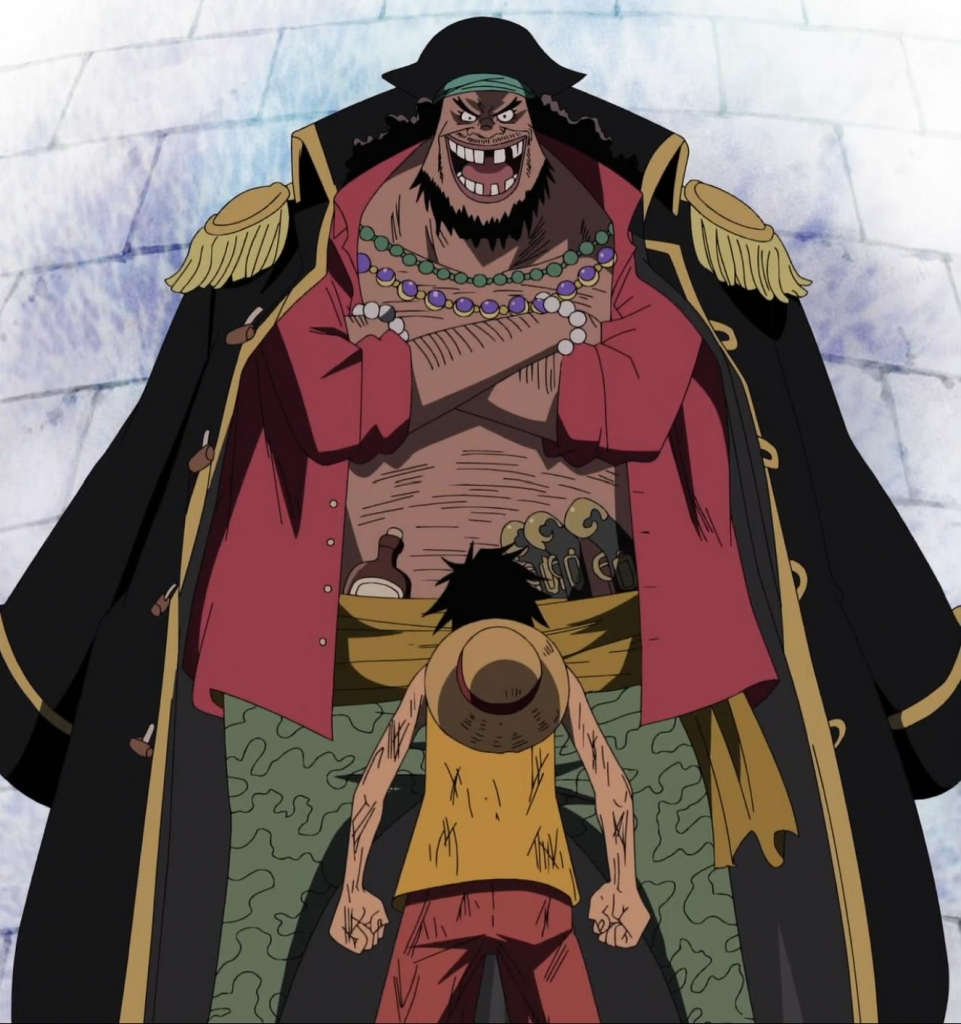 Bonus: Blackbeard
I cannot leave out the mastermind in finding out how to obtain and eat 2 devil fruits without dying. Blackbeard has the Yami Yami no mi fruit (dark dark fruit) obtained by killing Thatch for it and also killed Whitebeard with the help of his crew and the marines(they didn’t try to help him) to obtain Gura Gura no Mi fruit (Tremor tremor fruit). He became a Yanko (one of the 4 emperors of the sea) holding 2 devil fruits, betrayals one on top of the others, cunning and this is just his beginning. Who knows what he will accomplish next.

That’s it from me. Hope you enjoyed the list and any suggestions will be appreciated. Comment below. 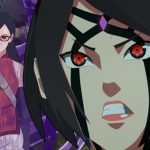