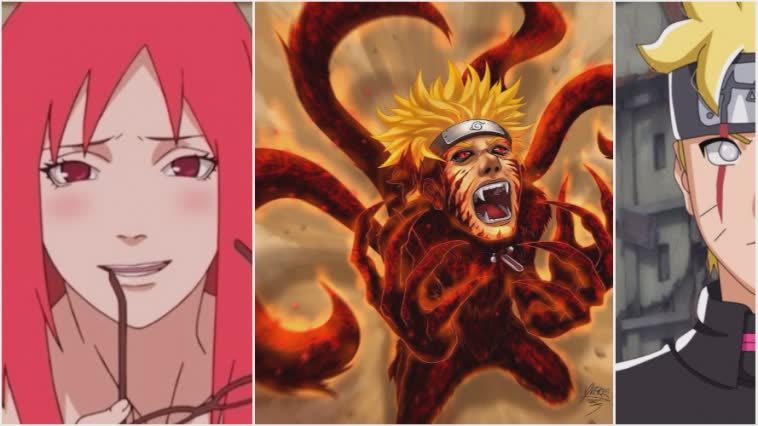 The Uzumaki Clan overpowered all other clans in Uzushiogakure. It’s literal meaning is Village Hidden in Whirling Tides otherwise known as Land of Whirlpools, with a symbol resembling a whirlpool which is now almost exactly to what the Hidden Leaf Village wear on their back. 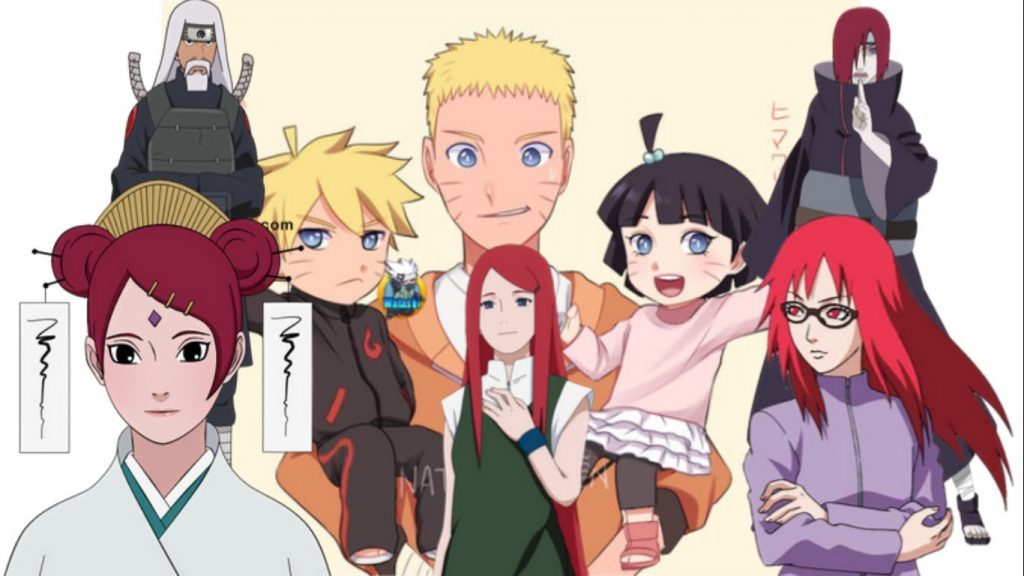 Uzushio’s Uzumaki clan and Konoha’s Senju Clan had strong ties together and intermarriage between was fairly common. Having blood relatives together they had a bond that remained strong throughout the years. 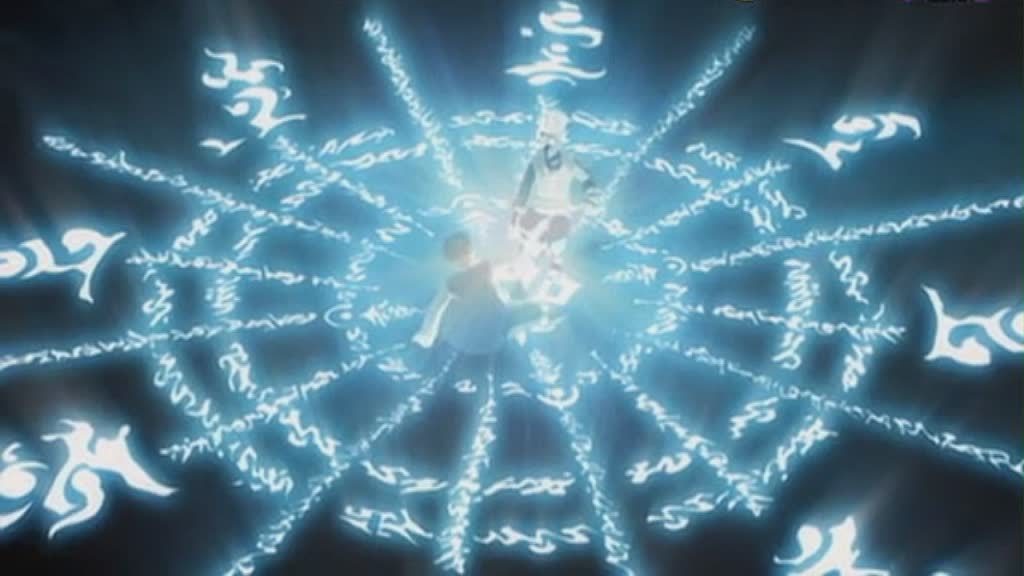 They are also widely known for their longevity, great reservoirs of stamina and vitality, quick recovery and slow aging. One example is Mito Uzumaki, she was born before the founding of Konoha yet she lived retaining her red hair colour whilst the Third Hokage took over leadership in Konoha. After having too much power and the other clans feared them, they teamed up to destroy the Uzumaki Clan, so far only 5 members are still alive that carry the same bloodline in their veins. 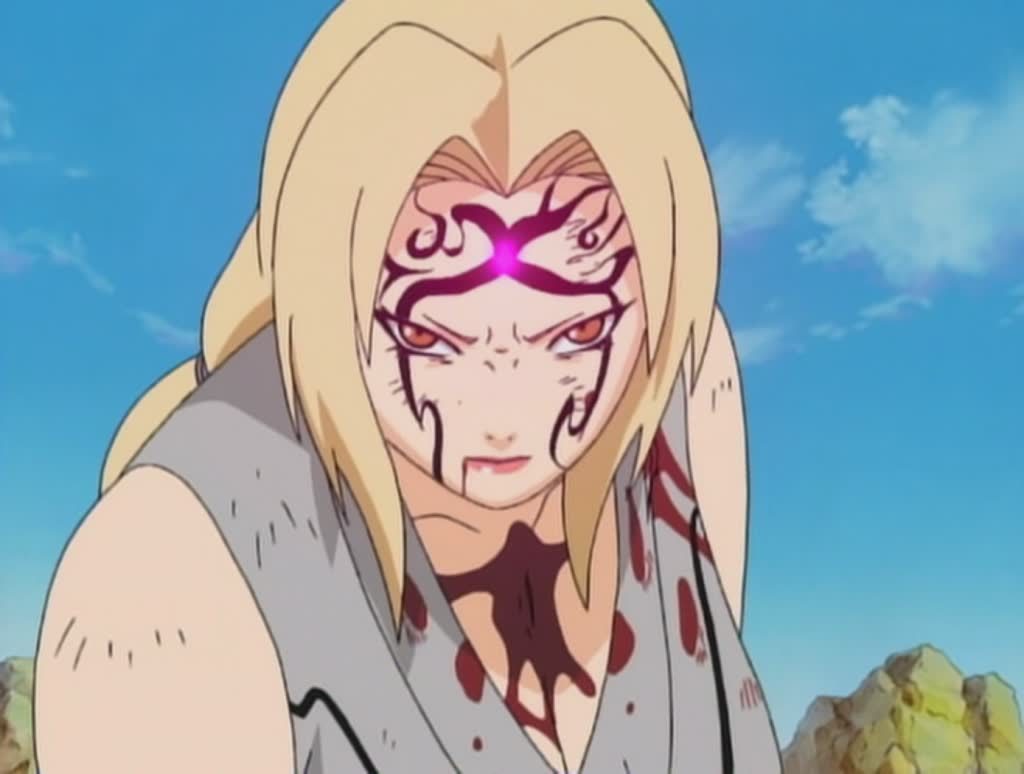 Tsunade Senju’s father is from the Senju Clan hence her surname but her grandmother was Mito Uzumaki. She carries the bloodline of the Uzumaki alongside Nawaki but he is deceased after being killed in the Second Great Ninja War. 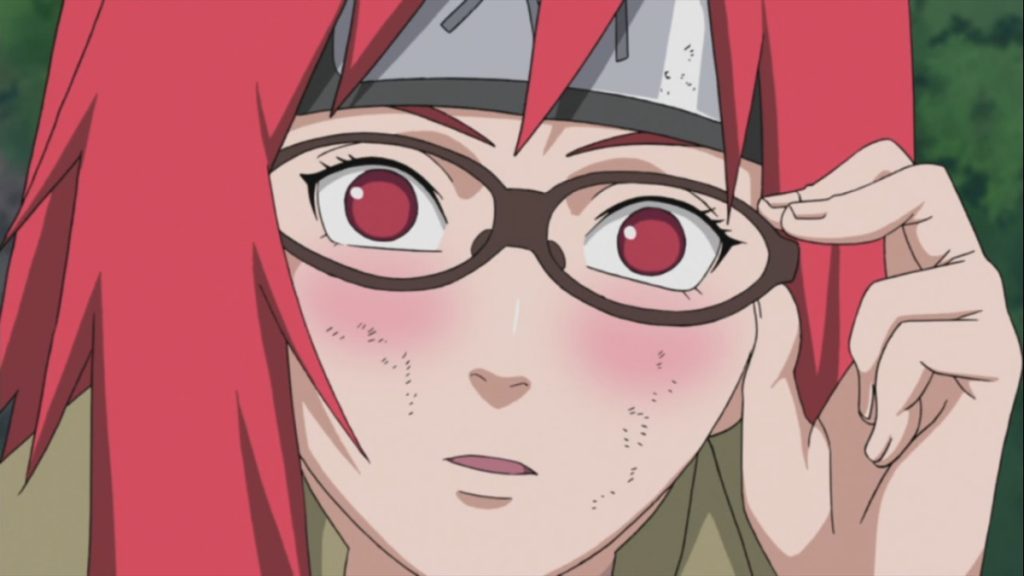 Karin Uzumaki having red hair and healing abilities which are 2 common traits in the Uzumaki Clan is the last known person bearing the clan. She is currently working as a researcher for Orochimaru, Karin also knows the technique Heal Bite Technique through biting someone she can heal them and even heal herself from injuries. 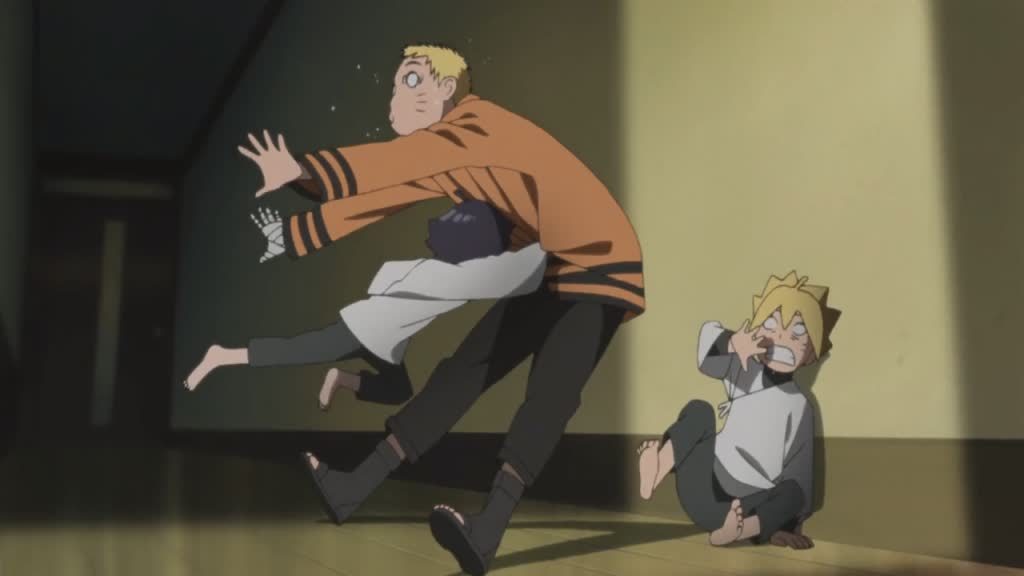 Himawari, daughter of Naruto Uzumaki and Hinata Hyūga is the youngest of the Uzumaki Clan and a child prodigy. At the age of 3 she was able to awaken unconsciously the Byakugan, having a 360 degrees x-ray vision with a small blind spot and also can see clearly the pathway of chakra system. 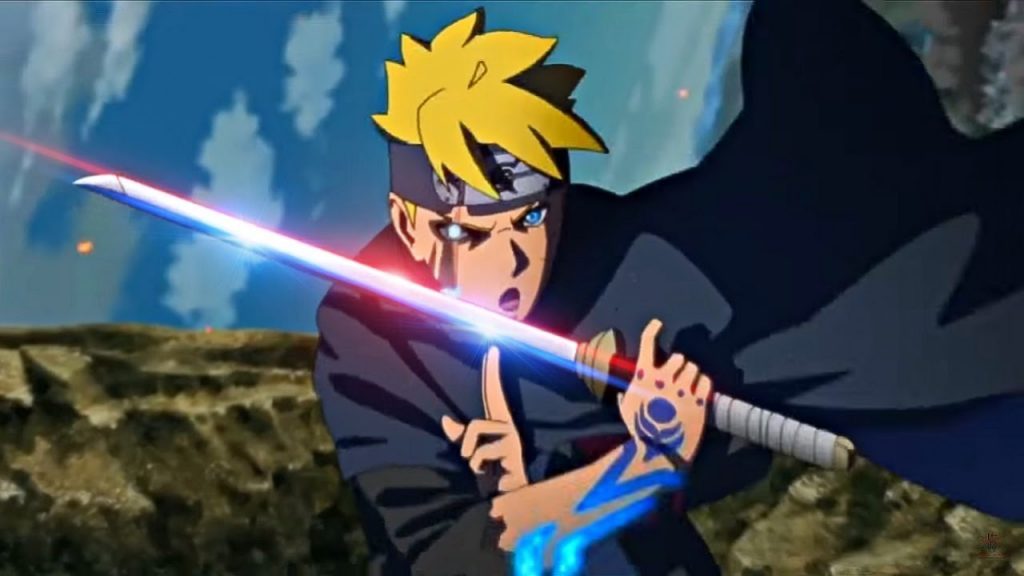 Boruto is the oldest son of Naruto and Hinata, the main protagonist of the series and an elite prodigy. At the age of 8, Boruto awoken Kekkei Genkai Dōjutsu in his right eye. This can perceive the flow of chakra making it visible to see different changes in chakra, it can see invisible barriers that connects different dimensions and also see clearly chakra pathway systems. Naruto Uzumaki, the son of Minato Namikaze and Kushina Uzumaki is the person who managed to revive the Uzumaki clan in Konoha with the help of his wife Hinata. Being the third jinchūriki, he had suffered from bullying and being distant from everyone yet somehow, he managed to overcome all this and be the most loved ninja in Konoha. That’s it from me, I hope you enjoyed it, leave your thoughts and comments below and hope to see you on the next article.

From the beginning of the Shinobi World in Naruto and Boruto series we have seen only 3 people bearing the title of Shinobi Gods who are Hiruzen Sarutobi, Hagoromo Ōtsutsuki and Hashirama Senju. In this list, we will be seeing the top people who can attain that level of power from the Boruto Series. 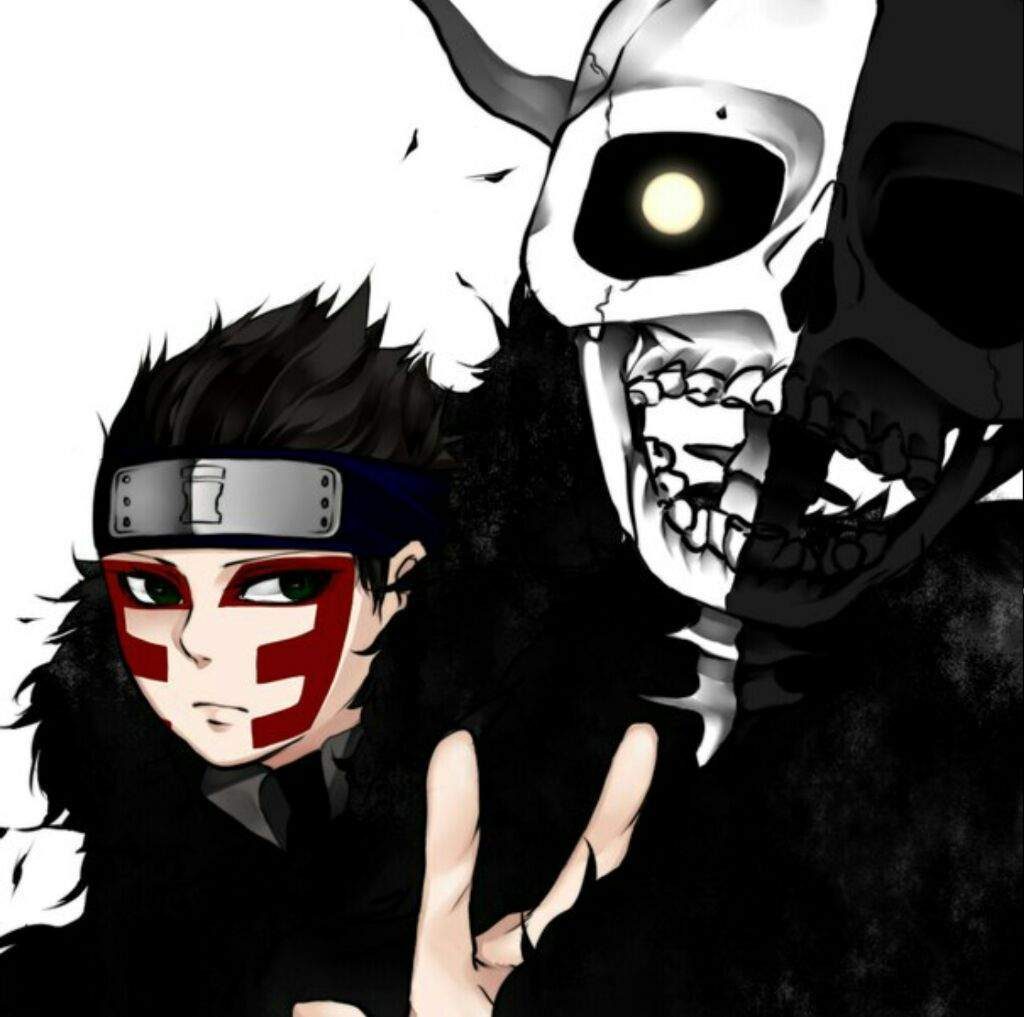 Shinki is from the Kasekage clan and the adoptive son of Gaara, so far, we do not know exactly whose son he is. He has the ability of using the Magnet Release Kekkei Genkai, allowing him to control Iron sand. He can use this ability to create a platform and allows him and his friends to float around in the air. He can also use it alongside his puppet techniques. Himawari is the youngest daughter of Naruto Uzumaki and Hinata Hyūga. At the age of 3 without any training she was able to awaken Byakugan after her brother Boruto tore her favourite toy. She can see 360 degrees field of x-ray vision with just a very small blindspot and can perceive clearly the chakra pathway system. Despite having no training, she was able to adjust to her powers and use them effectively. The oldest son of Naruto and Hinata, Boruto is one of the strongest genin of his age. Defeating Momoshiki Ōtsutsuki and already learnt how to add his nature with the Rasengan, he is one of biggest contenders for the God of Shinobi. Sasuke has recognized his potential, took him under his tutelage and is known as a prodigy. Shikadai is the prodigy from the Nara clan, he was able to beat Boruto in the chunin exam, only after cheating could Boruto win. Through his Kazekage bloodline he could awaken the ability of Magnet Release. Konohamaru, the grandson of Hiruzen Sarutobi one of the 3 Gods of Shinobi. He has the ambition to surpass his own grandfather. He became Jonin after the Fourth Great Ninja War. In his childhood, he was lazy and always trying to seek out a shortcut into achieving greatness but in his adult age we can see how much he has changed and with his training it seems like he is a completely different person. All we know at this point in time is that Kawaki had a part to play in the destruction of the Hidden Leaf Village, he is set to be a top villain in the series and will be a great contender for the God Shinobi. 4 years later from the Ōtsutsuki attack on the village, Kawaki faced off Boruto on the destroyed Hokage Rock and vowed to defeat Boruto and that the Shinobi era is done for.